What Is a Governor?

In simple terms, the governor is the speed controller in a diesel engine. Generators without governors have inconsistent power production, and this can lead to a constant change in power output. This instability happens when generators have a constant flow of fuel entering the engine. Alternatively, a diesel engine generator with a governor maintains a constant speed. This constant speed happens because the governor varies the amount of full going to the engine.

The type of governor in your generator depends on the generator itself. Each uses a different formula for determining the right fuel setting for its target speed.

Its Purpose in Diesel Engine Generators

A governor is critical in a diesel engine generator because the machine would slow and struggle to power something, like a big machine or piece of equipment, without the governor. You can manually increase the fuel entering the engine to handle loads of this size, but your engine will spin too fast once you remove the equipment. Depending on the industry, diesel generators power multiple loads at once. A governor is necessary with so many variances in power output. It controls the fuel and speed automatically, saving you the headache of managing a speed that delivers power to your equipment.

Advanced electronic control governors use a proportional integral derivative (PID) controller. These PID controllers can identify the exact electrical load it’s dealing with and find the exact fuel setting that keeps the speed consistent for all equipment attached to the generator.

By understanding the role of governors in diesel engine generators, you can see why they are the go-to generators for many businesses and organizations. While these generators are great options, you must find a good supplier who produces high-quality diesel commercial generators. If that’s what you’re looking for, come to us at Turnkey Industries. We have different sizes to fit your business’s specific needs!

We promise not to blow up your inbox 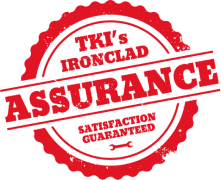